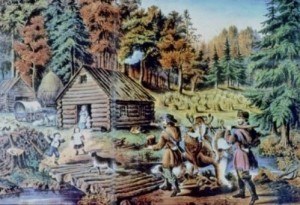 There was once a time in American history when the term “survival” was synonymous with terms like “daily life” and “making a living.”

Especially when we’re talking about ye olde trappers, fur traders, hunters and explorers of the 18th and 19th centuries, these folks knew the subtle nuances of survival. For instance, trappers would often vanish into the Appalachian wilderness for weeks and months at a time, only occasionally returning to their primary base camp or outpost to resupply. Then, it was back to the trail.

They wouldn’t usually make their way into town unless they needed to trade goods (or perhaps if they needed to send a telegram, I suppose). And this is one reason why I personally tend to take a historical perspective when it comes to expanding my knowledge of survival skill, bushcraft, and figuring out my own wilderness gear needs.

Hey, it’s one thing to learn this stuff from a survival dude on TV, but if we could hear from a guy like Davy Crockett these days, I’m sure he’d have a survival tip or two that might save us all a great deal of troubles, whilst afield.

Here, then, are three often overlooked survival essentials, using history as a guide:

Especially before footwear became a mass manufactured item, this was one piece of gear that tended to cause problems for wilderness ramblers in the olden days.

In fact, most of these folks were stuck wearing moccasins, especially since the boots of the period had a smooth, treadless sole — and that gets rather dangerous when attempting to traverse slippery surfaces such as wet rocks or mud. So, moccasins offered the needed traction in order to get from camp to the river and back (without breaking a leg in the process).

Moccasins, on the other hand, might have been great for traction, but HORRIBLE for support. So this would often become the cause of very sore feet  and what we might call arthritis.

This is why obtaining proper footwear is so important, especially because the ability to traverse distances in the wilderness is absolutely critical — even for daily life. In fact, if your shoes were lost, broken or simply worn to bits during a bugout or survival scenario, then you could end up getting yourself quite stuck, and also in a potentially dangerous scenario to your health.

All it takes is one wrong step, and not only does your mobility go right out the window, but infection and tetanus could become a very real issue in the process.

It’s one thing to be stuck in a patch of woods that you’ve known your entire life, or at least, visited enough times in the past to know where you’re going.

However, survival situations (and even bugout scenarios for that matter) tend to lead us straight into the absolute middle of nowhere. In fact, I’m sure we’ve all heard similar stories, in which a lost person was found by SAR teams, shivering, dehydrated, and alone — and only a few hundred yards from a nearby road.

That’s why navigational equipment is an absolutely crucial part of any 72-hour kit or a full-blown bugout loadout. Not only do you need the means to travel, but you need to know where you’re going. Otherwise, traveling only becomes a waste of time and precious energy. If anything, the fact that Lewis and Clark lost all of their “scientific” gear, except for their compass, should tell us something, according to an article from Crazy Crow:

Of all the scientific equipment bought in Philadelphia for the journey west,” says [National Museum of American History] curator Harry Rubenstein, “the Clark compass may be the only surviving object.

You can tell what’s an important piece of gear, not always by what an explorer packs before the journey, but by the gear that makes it home. Of course, the most obvious gear that makes the top of the initial packing list is also highly worthy of note as well.

While the packing manifest for the Lewis and Clark expedition first went over scientific/mathematical gear (a big reason for the expedition in the first place), and then listed muskets, rounds, gunpowder and other assorted weaponry (which also makes a great deal of sense), then clothing (that should be obvious as well), the first items mentioned on their “Camp Equipage” section of the list was kettles — six giant copper kettles, to be exact.

If you think about it, there were quite a few mouths to feed, and weaving a path through the unforgiving and uncharted wilderness makes for hungry work.

However, all too often, we tend to spend far too much time on trying to figure out how we’re going to find and take a meal. Yet, on my own personal experimental wilderness outings, I’ve discovered that I’ve often spent far too little time thinking of how I was going to prepare it.

Having proper cookware will not only make for easier cooking, but it facilitates our ability to expand our food options, and we reap far more benefits (nutrition and taste) from the food that we were able to procure.

So it seems that soldiers aren’t the only ones marching on their stomachs, because apparently, explorers and the rest of us do as well.