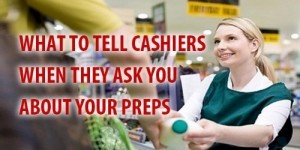 OK, so you’re a little annoyed whenever you buy new preps because some cashiers have clever remarks as to the quantity of food you’re getting and… you find yourself in need of some clever answers.

Not to worry, I’ve got plenty of comebacks for you and I’m sure you’ll love them. Of course, which ones you use depends on what you’re buying and what they are asking so you don’t want to fixate on one or two that you like best. You should know all of them and, even better, you should come up with your own clever lines to say to them,

Before we begin, just remember cashiers are people like you and me and they’re just making small talk, nothing more. So don’t act or be paranoid, you’ve got other people interested in your preps besides them.

Or you can just say “yeah” and leave it at that. if you’re not gonna say anything, they might think you’re prepping but who cares? At least it won’t bother you that much because you ended everything before it began.

…with my whole family. Which you probably should, anyway. No one can deny that a lot of the stuff you’d buy for stockpiling purposes would be useful when camping. It’s a good excuse and most people will buy it.

That could mean up to 20 or even 30 people! Of course, this won’t work if you’re getting canned food, MREs or freeze dried. It does work when you’re stocking up on beans, rice, water, pasta, salmon, cooking oil, spices, baking soda, vinegar, tea and coffee.

You want to say it sarcastically because then you’re sure they won’t believe you. On the other hand, if you truly don’t care of what others say and think, you probably don’t need to read this article at all.

Of course, you don’t NEED to say this word by word. It doesn’t matter how you phrase it as long as you come across congruent.

When you give one word answers, the other person just… gives up.

So they might think you’re a little crazy but at least they won’t know what you’re up to. You can have any number of sarcastic comebacks such as:

Just be careful with these. Don’t use the ones that are too cocky unless the cashier is open and friendly, otherwise they’ll end up remembering you, the thing you were trying to avoid all along!

The whole idea about buying preps is to become gray and one of the ways you do that is by not standing out too much (or at all). And humor is a good way to do that, by the way.

Well, it is believable, I guess. Cashiers aren’t supposed to be smart-asses so they’re not gonna say anything back. In fact, there’s nothing wrong with shopping every 3-4 weeks. You don’t have to say you hate it, you can just say it salves time.

You can go on and say that it’s always smart to have a well-stocked pantry since food prices are rising and packages are getting smaller. Plus, you can let them know that these foods have a very high shelf life, just to subtly assure them everything’s normal.

#9. “I’m stockpiling for my hunting/fishing cabin.”

Another good comeback which works better when you’re not lying. If you really do have a hunting or a fishing cabin, you should definitely use this comeback. And you should lodge it stocked up, too, you might end up bugging out there.

Who can argue with that?

Are they gonna come home with you to find out? Nope.

A fantastic way to avoid answering too many questions is to start asking questions yourself. This way, the cashier will end up talk more than you and forget all about how much you’re buying.

What you need is a good hook but it can’t be something unrelated to their comment. For example, if they’re asking why you’re buying so much rice, you can change the subject but you can use “rice” as a hook:

Yeah, I’m not sure which one is better, though, white or brown? White is tastier and has longer shelf life but brown is healthier.

And you take it from there.

Well, it can happen that a restaurant runs out of food and needs a few quick supplies, right? Another way of looking at it is that SHTF in that restaurant but you probably don’t want to mention this to the cashier.

It just works, particularly if the cashier is cute. And if she’s not, she probably doesn’t get a lot of attention…

Do You Really Need to Do This?

Not really but I found that the less arguments, the more peaceful I feel. Even when you don’t want to admit it, other people’s words, can get to you so the less you hear the better.

Last but not least, don’t forget that a cashier’s job is also to be friendly and make small talk. In the vast majority of cases, they won’t even remember what you told them after two minutes. They make small talk just to be polite and someone buying too much of one thing is always a good excuse.

How can you completely avoid these remarks?

If you’re not comfortable having to explain complete strangers why you’re buying so much of one thing, you can just avoid everything by: