Plague, nuclear holocaust, and alien invasions! Whatever end-of-the-world / post-apocalyptic theme you can think of is on TV right now. But in the fray of TV shows for preppers, a lot of good shows have come and gone. If you feel like all of the best shows are canceled prematurely, no one shares your pain like we do. In this list, we want to focus on 11 survival TV shows (past and present) that we think are worth checking out. 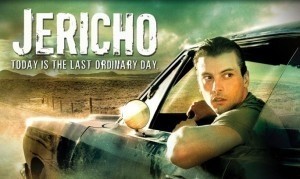 This apocalyptic drama which aired back in 2006, was based on the story of a group of people in a little town in Kansas calledJericho as they struggle to survive the affects of nuclear fallout in several major cities around the U.S. The interesting twist to this show is that there is an underlying tone suggesting the government might have actually been complicit in the explosions. The town’s citizens come together to try to restore resources such as power and water and war with neighboring towns over debatable local resources. The writers did a great job with the story line and keep you hooked with the strength and vulnerability of each character. They also manage to sprinkle in some humor for good measure – not to mention the amazing soundtrack.

Jericho was suddenly canceled after the first season and was met with a barrage of complaints to CBS from the shows loyal fans. After launching a grassroots internet mega-campaign to revive the show CBS agreed to bring it back for one more season and at least wrap up some of the unanswered questions.

In a world where civilization has been incapacitated by alien attack, we follow the story of a group of rag-tag survivors in the Boston area. In this post-apocalyptic world, there are no more electronics, military’s or major cities left, leaving only a handful of the world’s previous population to fight off the ongoing invasion. The odds are steep and survival is difficult when every day is is spent protecting and caring for the people, while also waging an insurgency campaign against an occupying alien force.

Survivors is a British post-apocalyptic fiction drama that follows a similar premise as a lot of the other survival shows; the pandemic wipes out most of the population, society breaks down, people try to figure it all out. But what I really liked about this one is that they kind of make hero’s out of normal, everyday people who didn’t really even know they had it in them until it really came down to it. They were just normal people until things got crazy and forced them to rise to the occasion, which is what I think we’re going to see a lot of in the E.O.T.W.

The Colony is a reality show on the Discovery Channel that originally aired in 2010. The show is basically a controlled experiment where a group individuals are placed in an isolated urban setting, where a hypothetical global catastrophe has occurred and the group has to try to rebuild with whatever they can find. They have basically an entire city to themselves and they can take over any property or resources they wish, but there are hired actors who act as thugs and looters to threaten and terrorize the members of the group to test their boundaries.

5. Out of the Wild: The Alaska Experiment

This is another Discovery Channel reality show where they pluck a group of city dwelling, urban professionals right out of their comfort zone and drop them by helicopter into the Alaskan outback smack-dab in the middle of winter. There are given limited supplies, a carry pack and a map to help them find their way to shelters along their route. If, at any time they sissy out and want to go home, all the have to do is hit their emergency GPS signal and a rescue helicopter will come get them out of there. I have to admit this show has taught me some really uniquesurvival skills that you might not see anywhere else like how to hunt for and prepare some rather unusual game like squirrels and porcupines. The show has just premiered for a third season which will take place in Venezeula. It should be interesting to see how the cast members fare in their new environment this time around.

While it only lasted 3 seasons, Extreme Survival with Ray Mears was an excellent wilderness survival show. Ray traveled to a diverse set countries all around the world, immersing himself in the culture and native survival techniques. Ray travels through the US, Canada, Italy, Brazil, India, Sweden, Denmark, the Netherlands, Russia, Australia and New Zealand. In addition to focusing on the native techniques, Ray also shares inspiring and sometimes horrifying survival stories that occurred in each area. There are dozens of shows and movies that Ray took part in, but this one should not be missed.

What makes Bear Grylls show so unique is the fact that he is willing to demonstrate some of the more strenuous or difficult survival techniques that most others would shy away from. He isn’t afraid to get down to the more nitty gritty aspects of survival that most of us would rather not have to think about like drinking your own urine to prevent dehydration or crossing a freezing cold river in the middle of winter. While it may seem a little over the top at times, I can’t help but think that there might be some point in our lives when we have to make a choice to do something disgusting or even painful in order to stay alive. You can’t help but respect the man for that.

Les Stroud brings a humble quality to the realm of survival TV shows in Survivorman. Without any support staff or even a camera crew, he shows what it really takes to survive in the wilderness by yourself and with less than ideal supplies. From desert and swamp to the arctic mountains, Les has to survive for seven days, all on his own. But the difficult terrain doesn’t bring spirits down, Les keeps a positive and comedic attitude throughout each situation, making it feel more like a camping trip than a survival experience. You’ll come away from every episode with ancient survival techniques passed down from the natives of each area.

What will you do when disaster strikes? Spike TV’s new original series Surviving Disaster, led by Navy SEAL Cade Courtley, vividly takes viewers through catastrophic scenarios and arms them with the knowledge needed to survive the unthinkable. Courtley tackles worst-case scenarios and equips viewers with the practical information needed to save their own lives and the lives of their loved ones. Whether the threat is natural or man-made or on a national or personal level, Courtley speaks directly to the viewers and guides them through a comprehensive, step-by-step process to not only survive the big picture disaster, but endure the many dangerous obstacles that may occur within each catastrophic event. While leading viewers out of danger, Courtley not only provides helpful tips and hands-on instruction, but swiftly points out common misconceptions and fatal mistakes. Unlike any other series, Surviving Disaster may actually save lives by providing actions that anyone can perform.

This show is set in a post-apocalyptic future where all of the adult population was wiped out by a pandemic, leaving only kids to rule the world. We follow the main character “Jeremiah” played by Luke Perry as he tries to find out the real goal behind the pandemic and who is at fault. He partners up with a couple more hard core survivalists as they commandeer resources, discover hidden government bunkers and try to rebuild a broken nation.

The series ran from 2002 to 2004 on Showtime, but production stopped in 2003 when creative differences among the production companies couldn’t be resolved. The show wrapped up it’s second and final season in 2004 after a long hiatus off the air and resolved most of the plot threads from the first season.

Wilderness survival takes on a new twist in Dual Survival when naturalist Cody Lundin and military-trained Dave Canterbury tackle tough terrain as a team. Each expert has experience in different types of survival situations, which exposes that classic question; how would a survival expert who’s never attempted this fair? It’s almost like seeing how you might respond in that extreme situation, which brings humanity to the show. You will also get to see how polar opposites might approach the same problem and be able to overcome it in completely different, yet successful, ways.

There are other TV shows like Naked and Afraid, Survivors, The Walking Dead, Storm Chasers, Combat Zone, and many, many more.  These are also all worth watching!