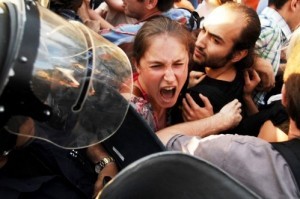 Good things do not come easily.  If you want something that is worthwhile and valuable then you will have to work hard at it consistently with patience.  In our society we are used to having everything quickly such as microwavable food, fast food and ordering things online.  Then when something that we really want becomes hard or takes too long we get frustrated and discouraged.

When I became interested in the preparedness idea it was hard for me to pinpoint how to start or where to begin.  Searching on the internet resulted in hundreds of websites and YouTube videos each with differing views and experiences.  I became overwhelmed and discouraged.  I began to feel it wasn’t worth the time to sift through the information to truly become prepared.

However, everyday I see on the news and read in the papers daily what is happening in our world.  Natural disasters are happening more frequently.  Violence and hatred is at an all-time high in this world.  Then seeing the economy tanking with millions of people out of jobs I realized that it worthwhile to be prepared now.

Ultimately it was a verse of scripture that I came across that made the difference.  In Proverbs 22:3 it says“The prudent see danger and take refuge, but the simple keep going and pay the penalty.”  Now you may not be a Christian or even believe in a deity but you cannot deny the wisdom of that verse.  How many times have we seen societies and even regular people neglect to take heed to warning signs ending in tragedy?

As I continue this prepper journey there are challenges that I face almost daily.  It can be easy to let discouragement turn us around and neglect the warning signs that we see every day.  It gets hard but I believe that it is worth it to continue on.  Our work will not be done in vain.

With that being said I believe there are a few challenges that every prepper will face during their journey.  So I have included my suggestions on how to overcome those challenges.

8 Challenges Every New Prepper Will Face

1. Not knowing where to start

As I mentioned when I began my prepper journey I was clueless on whereto start.  I didn’t know any dedicated prepper.  My family members do not believe in the same way of thinking so I couldn’t ask them for advice.

Therefore, I turned to the wonderful world of the internet where many believe if it is on the internet then it must be true.  I spent endless hours studying and sifting through the knowledge available in order to find a foundation to build on top of.

Eventually after much studying of how to get started I was able to put together a plan.  This wasn’t a concrete plan but is something that is ever evolving.  Either way it is important to have a plan instead of mindlessly wandering buying gear here and there.

In a previous post Must Have Prepper Gear and Where to Start I outlined that plan.  It helped me determine what dangers are most likely to happen in comparison to other threats.  From there I was able to prioritize those threats by first getting a better understanding of them.

For example, you don’t want to build a fall out bunker because you saw it on Doomsday Preppers but not be prepared for a hurricane if you live in Florida.  Yes, a nuclear attack may happen but the likelihood that you will face a hurricane is a lot higher.  Therefore you need to identify the threats and prioritize them using that post.

2. Disapproval from friends and family

In our society people call someone who is a prepper crazy because they believe in being prepared for disasters instead of depending on a government to save them.  People have become so mindless that they believe something similar to a small pox outbreak could never happen in our time.  Then when they meet someone who does it shocks them.  The media has painted preppers to be crazy conspiracy enthusiasts which is true to extent but doesn’t apply to everyone who calls themselves a prepper.

As a single person I’m not dependent upon the approval of a wife or kids.  That is much more challenging especially if you are a new prepper and your spouse is not on board.  Many times they will roll their eyes at you or scold you for spending so much money on supplies.

In a previous post by Dan Sullivan he explains how you can be a prepper without looking crazy.  Our goal shouldn’t be to control family members into believing what we believe.  Instead we should try to speak their language.  For example, they may not believe in the potential of martial law being instituted but they could be concerned about an earthquake in your area.  Try finding their fears and speak their language to encourage them about the importance of being prepared.

3. Finding storage for your preps

As an apartment prepper it is extremely challenging to find space to store emergency supplies.  You don’t have a garage or able to expand your property to fit everything.  Storing food alone is challenging.  Then you have to find where to store gear.

This challenge is not only for the apartment prepper.  Even if you have a house you could be very limited to space due to having a family with kids.  So we have to find creative ways to build storage.

On Pinterest there are tons of articles on prepper storage that you can find to help you to either build your own storage or find small living hacks.  Another good option is look into renting off site storage.  Now I would recommend having the essentials in your house along with at least a 30 day supply of food.  The remainder can be stored in these off-site locations.  This is also good if you are raided and your supplies are stolen.  Off-site storage will give you a backup solution.

4. Getting caught up in prepper fantasies

A lot of new preppers have seen episodes of Doomsday Prepper and are attracted by what they see.  They see these bunkers and weapons thinking that it is all there is too prepping.  They are made to believe that they could be a one man army against the world.

I hear it all the time from new preppers when they are just getting started with building a bug out bag first.  They think that it is going to be like on the tv shows where they can evade danger to live in the woods without facing any challenges.  Of course they don’t realize that bugging out should be the very last option to consider.  You should be more focused on bugging in.

5. Too much focus on gear and not survival

Don’t get me wrong, this blog is about prepper gear where I share reviews of what I buy along with DIY survival gear.  But the focus should not be on the gear when you first get started.  The focus should be on surviving.  You can survive without a lot of the gear that is available.  Prepper gear just helps make it easier.  However, if your gear breaks or fails then you better be able to survive without it.

When it comes to survival you want to follow the rule of 3’s.  This rule states that you can survive only 3 seconds without hope, 3 minutes without air or blood, 3 hours in extreme weather conditions, 3 days without water and 3 weeks without food.  So you should learn the survival basics of each.  For example you can learn how to filter and purify water so that it is drinkable.  You could also practice building a fire to survive extreme weather conditions and so on.

6. Lack of money to purchase gear

A lot of us are feeling the effects of an economy that is suffering.  Even if the economy is doing well there will still be a lot of us that will still be suffering.  This makes it almost impossible to buy high quality gear because it can get pretty pricey.

This is why I share my experience purchasing prepper gear and testing it on this blog.  I can’t afford some of the high end stuff.  So I purchase the best possible gear at the most reasonable price.  Don’t get me wrong you pay for what you get.  Therefore if you buy generic then you are buying generic quality which typically isn’t great.  So you will have to sacrifice sometimes.

However, I try to provide you with the best possible price for the gear that I review and why I recommend purchasing from there.  Most of my gear is purchased through companies on Amazon because I don’t want to search all over the internet to find gear.  But there will be some gear that is not available on Amazon that I will purchase as well.

In my post 7 Great Inexpensive Places to Buy Prepper Gear I include a lot of great places to check out.  Some include yard sales, Goodwill, army surplus, etc.  Sometimes we may have to start with cheaper gear just to have something there quickly available until you can afford the better quality item.

Being a prepper is a lifestyle.  It isn’t something that is done overnight.  You will never be finished being prepared because there is always going to be something better to buy and learn.

There is that fear that will be present when it comes to being a prepper.  This is especially true if you get caught up in a lot of internet shows and conspiracy theorists who live off of the fears of others.  Be very weary of people who constantly keeping you in fear in order to get you to purchase their products.  Stuff like that can drive you insane and into poverty.

One funny thing that I have learned about preppers is that they are very suspicious of other people especially if you are also a prepper.  Many of them believe that if they let you know that you are a prepper then you are going to come to their house and raid them when SHTF.  So they don’t bother bonding together to build prepper communities.  This has been especially challenging for me.

There are few places or things that you can do to meet like-minded people.  You can find a local amateur radio club in your area.  A lot of the people who are HAM operators are preppers or are like minded.

Another great option to find like-minded people is to visit a gun range frequently.  You can also join a local rifle club or gun enthusiasts club.  Many of those people are concerned about defending themselves and others in times of a disaster.

One final suggestion is that you can find a local survival or bush craft group.  A lot of survivalists and bush crafters are also concerned with preparedness but may not necessarily call themselves a prepper.