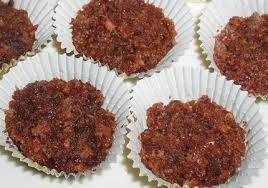 Pemmican is a tasty high-protein treat that’s perfect for snacking, traveling, hiking, camping, and for disasters or other crisis events, where cooking meals may be difficult. As a bonus, this lightweight nutrient-packed food needs no refrigeration.

Traditional recipes for Indian pemmican usually calls for a mixture of shredded jerky, dried berries and nuts, along with a bit of melted fat to hold it all together. In the old days, it was considered essential for sustaining warriors and hunters on the trail. Pemmican can be eaten out of hand, or added to soups, stews, or anything in need of an extra nutritional boost.

The fast-food idea caught on with the Hudson’s Bay Company and became a standard feature in the North American fur trade industry. The highest prices were paid for Native American-made pemmican that was stored in buffalo skin bags, called parfleches. The filled bags were sealed with melted fat. The parfleches shrank as they dried, creating a kind of vacuum seal that helped to preserve the contents for years. Traditionally, this kind of pemmican was made with equal parts dried meat and melted fat. Animal fat taken from around the kidneys and loins were considered choice. If taken from beef, this kind of fat is called suet. For those who prefer a fat-free pemmican, a recipe is included here.

To eat pemmican Native American style, pop a little bit into your mouth and chew it just about forever, sort of like chewing gum. That way you entertain your mouth and extract every bit of goodness from the dehydrated meat, berries and nuts. It is surprisingly filling when eaten this way. Even though the food is low-volume, it it packs power because it is highly concentrated and loaded with protein.

There are different schools of thought regarding the shelf life of pemmican. Some say it will last for only a month or two; others say it will last for years. It depends upon the temperature and humidity of the environment, the quality of ingredients, and how it is stored. At any rate, the fat content will also determine shelf life. After the fat goes rancid from age, it will taste bad, and should be thrown out. The cooler the storage temperatures are, the longer the fat will stay fresh.

To help extend shelf life, I like to store pemmican in the freezer. If the electricity should ever go out long enough to affect the contents of the freezer, I will take the pemmican out of the freezer, and after making sure that it is perfectly dry, store it in a glass jar or plastic bag in a dark cool place.

For even longer term storage, I sometimes use raisins in place of fat in the traditional recipe.

In a blender, whiz together equal parts of pulverized-to-a-powder jerky, ground dried berries, and chopped nuts of your choice. Add enough raisins so that the smashed up raisins hold everything together nicely. Then you can form marble-sized balls or whatever. No blender handy? Chop with a knife, then pound the foodstuff to a pulp with a rock.

This stores a lot longer than the traditional version with fat. But then, during really high caloric demanding situations such as hiking, working, or coping with a disaster, you’d be wishing for that little extra fat, because it supplies a majority of the calories in pemmican.

Another delicious alternative to animal fat is peanut butter, which provides more sustenance than the fat-free version.

Pemmican with Honey and Peanut Butter

Some people prefer peanut butter to fat; some like a blend of honey and peanut butter. Here is a recipe that helps provide calories without fat:

Warm the honey and mix with the peanut butter together until well blended.
Add all ingredients together. Store in a plastic bag in a cool, dry place.

Cook chunks of fat over low heat until all moisture is removed and oil is rendered. Strain well, allow to cool until hardened. Reheat and strain again, to make the fat firmer, and to improve its keeping qualities.

Pulverize dried meat (jerky) to a powder. Add equal parts of ground dried berries and chopped nuts. Add just enough hot melted fat into the mixture to lightly coat all the ingredients. Immediately stir the mixture, working quickly to allow the melted fat to soak into the powdered ingredients before cooling. If it cools too quickly, gently warm the mixture in the microwave or over a low flame. While still warm, shape the pemmican into balls, bars or small patties.

Lacking traditional containers such as animal intestines or skin parfleche bags to store them in, wrap the pemmican pieces in wax paper. Store in glass jars or plastic bags.