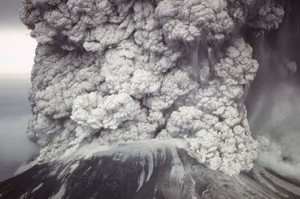 Additionally, gigantic volumes of volcanic particles would be forced high into a layer of the atmosphere called the “stratosphere” where it would likely remain for several years.

A large amount of volcanic ash being suspended in the atmosphere would have an impact on the amount of incoming solar radiation making it to the surface of the planet.  The Earth depends on sunlight to warm the planet.

A major disruption in sunlight reaching the surface of the Earth will cause disruptions in weather patterns and plant life (causing a domino effect).  After a super volcanic eruption, it is thought that global temperatures would fall dramatically causing a nuclear style winter.

Volcanic eruptions are measured on the Volcanic Explosivity Index (VEI).  The VEI is basically a measure of a volcano’s characteristics.

Three of the primary characteristics measured are:

Here is the scale just based on the volume of material ejected:

Here is a graphic from the USGS to give you an idea of the magnitude of a super volcanic eruption compared to other eruptions:

Yellowstone is monitored around the clock by the Yellowstone Volcano Observatory (YVO).

A large scale eruption will likely be preceded with plenty of warning time.  Geologists keep a close eye on many different potential indicators of a pending eruption.  They are basically looking for signs of big changes/movement within the magma chamber beneath Yellowstone.

Many scientists agree that the odds of Yellowstone erupting any time soon are very low.  According to the USGS, there is about an annual “0.00014%” chance of another caldera forming eruption happening at Yellowstone.

Contrary to what some people claim, Yellowstone is not overdue for another super volcanic eruption according to the USGS.  The USGS uses the average of the 2 estimated intervals between the 3 major eruptions to come up with an estimated average of 730,000 years.  The last cataclysmic eruption was thought to be around 640,000 years ago.

An eruption at Yellowstone might not necessarily be super volcanic in size.  There could be smaller scale eruptions at Yellowstone.

Even though the chances of a major eruption are thought to be exceedingly low, no one really knows for sure when it will erupt, or the true effects of a super volcanic eruption.

Even though they claim it is not overdue for an eruption, the fact that the U.S. government monitors it 24/7 should tell you that it is a concern to them.

The magma chamber beneath Yellowstone is much larger than previously thought which could mean the potential is there for a larger eruption.

If there is a super volcanic eruption, nothing can be done about it other than to heed any official warnings (if there is lead time) and have a plan to get out of dodge before it erupts.

If an eruption were super volcanic, gigantic volumes of ash would be deposited across the country and across the nation’s food supply.

In the event of a super volcanic eruption, gigantic volumes of ash would blanket untold numbers of structures and dwellings causing buildings to collapse.

Volcanic ash looks like shards of jagged glass under a microscope.  Even small amounts can do damage to your lungs if inhaled.  Think about a nation blanketed with it.

Large amounts of volcanic ash covering the nation’s power grid will likely cause it to collapse.

There are other known super volcanoes spread out around the world, plus there are likely many that scientists have not discovered yet.  As a global collective, the odds of a super volcanic eruption happening somewhere on the planet is greater than those of just considering Yellowstone.

IS THERE A ‘SAFE’ DISTANCE FROM A SUPER VOLCANO?

How far of a distance is a ‘safe’ distance from a super volcano?  First off, it must be noted that a super volcanic eruption will likely be disastrous on a global scale.  There will be no escaping the effects of crop failures, food shortages, grid failures and climatic changes etc.  Mankind would have to ride out those effects in the aftermath.

As for a ‘safe’ distance from a super volcanic eruption itself, it really depends on the size of the eruption.  There are just too many unknown variables to name a ‘safe’ distance.  The regional devastation of surrounding states would likely be cataclysmic.  I’m no geologist or volcanologist, but I personally wouldn’t want to be within 1200 miles of a super volcanic eruption.  That distance is just my personal opinion.  The farther away, the better in my view.

Here is a USGS model of possible ash fall after a month long super volcanic eruption at Yellowstone:

Pertaining to the model graphic above, the USGS does state that “Results vary depending on wind and eruption conditions”.  The USGS also states that the model above was constructed using historical winds from January 2001.

Some of the things scientists look for as potential warning signs:

Frequency and magnitude of earthquakes in the vicinity

The signs above are no guarantee of an eruption, but they could indicate magma is on the move beneath Yellowstone.  Scientists are typically looking for changes in the aforementioned that are outside the historical norms.